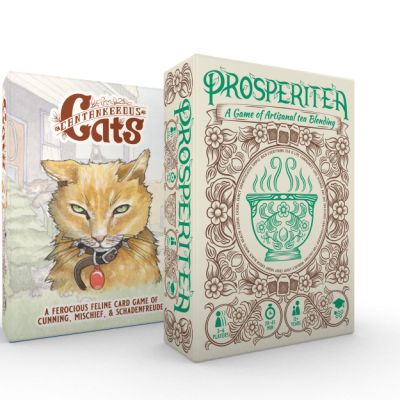 Mentha Designs began the foray into tabletop games with Cantankerous Cats in 2016. We successfully funded our very first Kickstarter campaign and turned a lot of heads while doing so! We have since worked on multiple games for other designers and publishing companies and are currently working on our second project: Prosperitea. You can browse our list of games and visit their websites below!

A Mentha Game is more than a simple “print it and sell it” sort of affair. Our motto here is “Theme First.” When you play a Mentha Designs game, you are stepping into a world that extends beyond your tabletop. From day one we made the foray into teas, storybooks, and high production video content to help immerse the player in the world of our games. We bring every corner of our experience to every project we produce and our first party games are the best examples of that. 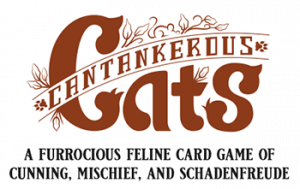 You are a Cat. You live in a House.

You share this House with a pet Hoomin. Your goal is to smother this Hoomin with Affection, then cause as much Mischief as you can without being thrown out of your House. The first Cat to score NINE Mischief points is the winner!

You Own a Tea Shop.

You pride yourself on your craftsmanship and strive to be the most prestigious tea shop in the neighborhood. Source ingredients, blend them into a wide variety of teas, then sell them for instant profit or display them in your window for Prestige. The tea shop with the most Prestige at the end of the game is the winner!

Prosperitea is live on Kickstarter.

Ever since we made our splash with Cantankerous Cats, our work has been sought out by companies looking for an extra level of attention to theme and execution beyond your typical board game design. The following projects are work that has been produced for other companies using the same level of care and skill as our first party games.

After launching Prosperitea on Kickstarter, I was contacted by the client to spearhead the visual redevelopment of a modern board game classic by Bruno Cathala and Ludovic Malbanc. They wanted someone with a keen eye for theme, detail, and immersion and that happens to be where I excel as a designer and art director.

Everything from the original version of the game was scrapped, reimagined, and redeveloped with painstaking research about the Titanic incident itself, the advertising collateral from the era, the costuming, and the level of diversity present on the ship. Everything that was designed was based either on actual documents from the ships records or inspired by the best information we could find from the time period. 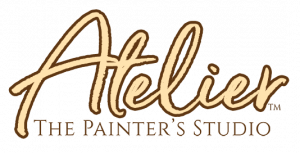 In November of 2018, I was approached by Josh Wood from AEG to step in and provide a complete visual overhaul to a project that was in need of a sense of visual flair. When he described the concept and subject matter to me, I was hooked!
Atelier is a simple dice rolling game with a light territory control element. The players are all master artists managing their workshop to create masterpieces from popular styles in the 19th century.
While most of the design and UI work is my own, there are a few small vestiges of the original design by Scott Nicely. The wheat icon for realism set the tone for the other icons we would create to represent the four different styles of art.

His original wire frames were also largely respected as I went in to clean everything up and create my art deco inspired UI.

This game would not have been possible without the generous trend of museums in the United states of releasing high resolution scans under the Creative Commons for public and professional use. The subject of art history is important to both me and Josh and to honor this, each piece is fully credited and cited on the cards so players can see the originals in their home galleries.

For more information, you can visit AEG’s website for the game at https://www.alderac.com/atelier/